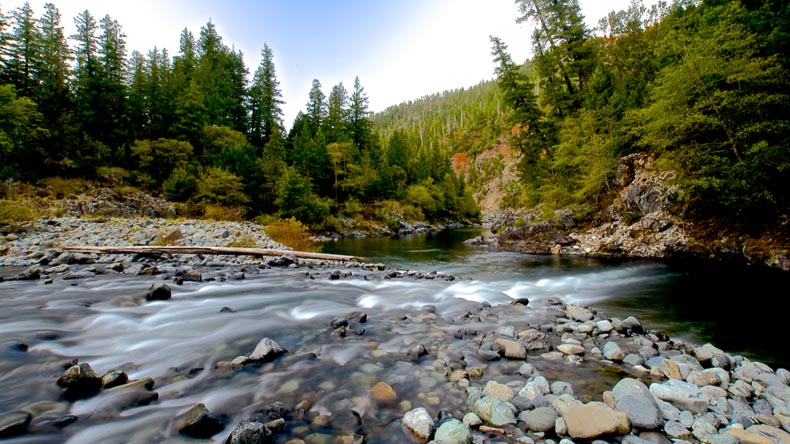 A Legacy of Protection for Fish & Forests

Located on a sweeping bend of the South Fork of the Smith River, Rock Creek Ranch is a place where the seasons are felt.  During the rainy season, when the river is high, it moves with a booming and boisterous energy—and one can almost hear the boulders moving in the riverbed as the water flows past.  In summer, the river is an elegant emerald ribbon that gathers and slows to create two swimming holes, both jewels in the crown that is Rock Creek Ranch.

The Smith River Alliance has owned Rock Creek Ranch since 2002, and it expanded the property by 100 acres in 2013. The Ranch is operated with a community spirit and hosts many cooperative ventures on and off the property including youth camps, community education programs, and retreats. Remnants of the old lodge are located next to a magnificent emerald pool. The original lodge foundation of the lodge serves as an impromptu amphitheater, outdoor classroom and special gathering place.

At Rock Creek Ranch, visitors can withdraw from the busy world and find inspiration and renewal in the Smith River Canyon. The summer season offers retreats, slide shows, youth camps and workshops. RCR is an off-grid facility, generating its own electricity. Power is generated by a solar system in the summer and a micro-hydroelectric system in the winter months. To read more about the Rock Creek Ranch Sustainable Energy System, click here.

There was no road in the 1930’s when the original owner of Rock Creek Ranch first arrived by trail over the Little Bald Hills. Drawn by the beauty, fishing and solitude, George Owen Knapp built the present day house and a lodge that was used until the river swept it away in 1955. Knapp was a wealthy, retired industrialist, and a philanthropist. He financed the first modern hospital built in Del Norte County.

In May 2002, Smith River Alliance acquired Rock Creek Ranch from Ralph and Dorothy Hollingsworth, who were both active and volunteered widely in the community. The Alliance has continued that community spirit with many cooperative projects both on and off the property, including youth camps, community education programs, and retreats. Rock Creek Ranch is located in the heart of the Smith River National Recreation Area. As such, it’s past, present and future are linked to the SRNA and the legislation that created it.

Create your own memories at Rock Creek Ranch! Learn more about Booking a Stay.